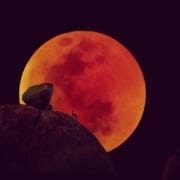 Photo Caption: Last night was the first full moon since the  beginning of August.
We are still loving the photos and edits that are surfacing. Like this amazing image combination by @ian_s_thomas.

The image is made up of two separate images edited together in Photoshop. Read @ian_s_thomas’s original post for his beautiful explanation of how and why he created the image @ormsdirect @folkgood @instagram_sa @ig_myshots @ig_fotografdiyari

Text by Ian Thomas. Ian Thomas is a motivational and keynote speaker who specialises in the lessons business teams can learn from nature, specifically Lion Pride’s.

“Metamorphosis is the process by which a caterpillar transforms into a butterfly. Transmogrify has a similar meaning, but is mostly used where the transformation is deemed to involve sorcery and the result is grotesque or bizarre. In Europe during the Middle Ages, it was widely reputed that the full moon had the power to transmogrify humans into werewolves or vampires. Even today, many believe that its gravitational pull somehow disrupts our nervous system causing erratic, criminal, or crazy behaviour.Shakespeare added to this belief when he wrote, “It is the very error of the moon. She comes more near the earth than she was wont. And makes men mad.” (Othello)

My view is that the full moon certainly influences our behaviour, but not because of its gravitational pull. It changes our lives through the power of its beauty. It entices the spirited to walk, swim, and dance in the moonlight – see song by King Harvest. It has inspired poems and and love letters from Diä!kwain, a /Xam bushman, to Khaled Hosseini, “Go slowly, my lovely moon, go slowly.”

It also triggers our imaginations and we search for shapes and stories on its surface. Some see a bent old man with a bundle on his back accompanied by his faithful dog. Others see a hare, a moon maiden, even a toad. The moon is a cosmic rock and Klipspringers love rocks, but I can’t find a likeness of the antelope on its surface. However, if I combine two images, one of the recent ‘blood moon’ and one of a huge split-rock boulder, you can clearly see a Klipspringer, maybe even two.

A Klipspringer is a small antelope that lives on rocky outcrops in Africa.”

On July 27 an important lunar moment occurred. Not only was it a total eclipse, it was the longest lunar eclipse of the 21st century. The “blood moon” lasted for 1 hour and 43 minutes. Earth’s natural satellite caused the moon to turn into a mesmerizing ruddy-brown red colour.

The total spectacular celestial moment, from the moon starting to disappear to it reappearing again, lasted roughly 4 hours. It was not visible in North America, but Africa was positioned perfectly to see the natural phenomena. Other areas that had a good vantage point included the Indian Ocean region, Southern Asia, and the Middle East.

The eclipse occurred on the same day that Mars reached its opposition, meaning it was shining bright in the night sky. Also, July was the month that the red planet was the closest to us since 2003.

What Is A Blood Moon

The great thing about a lunar eclipse is that you can observe it with the naked eye, not like a solar eclipse which requires special viewing equipment. Binoculars or a telescope can be used to view the eclipse more closely.

The reason for the reddish brown or deep red colouring during the lunar eclipse, is an interesting phenomenon. Some of the sunlight passing through the earth’s atmosphere is bent at the edges of the planet and lands on the moon’s surface. The shorter-wavelength light (greens or blues) scatter more. And the longer-wavelength light on the red end of the spectrum remains in the air for longer.

Why Was It the Longest Eclipse of the Century

The position of the moon controls the duration of a lunar eclipse as it moves through the shadow of earth. Earth’s darkest shadow is called the umbra. Imagine a cone extending from the Earth, but in the opposite direction to the sun, and you’ve got an idea of how the umbra looks.

Depending on the movement of the moon, it can either just graze a bit of the cone while moving through. Or it can go through deeper, in the middle of the cone. The eclipse extends when it goes through the middle part of the umbra. During the July eclipse, the moon was at a further point from the earth in its orbit. This means that it looked slightly smaller and it also took a bit longer to travel through the earth’s shadow.

Related: Fun facts about the moon

When Will the Next Lunar Eclipse Occur?

On January the 21st, 2019 the next total lunar eclipse will be visible from North America. It will only be a partial eclipse in South Africa. The total eclipse will last for 1 hour and 2 minutes. If you happen to find yourself on the American West Coast, you will have the best view. On the 16th of July, 2019 another special event will occur. It will only be a partial eclipse, but it coincides with the 50th anniversary of Apollo 11 successfully landing on the moon for the first time. It will be visible from parts of Africa, Australia, Asia, Europe, South/East North America, and South America.

View the eclipses visible from Cape Town. Scroll down for a list of the upcoming eclipses in 2019.