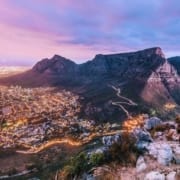 Cape Town has been voted best city in the world six times in a row. Each year the Telegraph UK asks their travel readers to vote and pick their favourite cities in the world. We totally understand why the Mother City has claimed the top spot six times now!

It feels like the city is filled with endless adventure options. And these range from tame leisurely activities, to hard core challenging ones. The Cape Town Big 6 company has created a platform where you can conveniently book the top must-do experiences. The following should be high on your holiday priority list. And if you live in Cape Town, make sure you put these on your bucket list.

Each cable car carries up to 65 people, that’s approximately 800 people enjoying a scenic trip up the mountain every hour. That adds up to about 909 000 people every year. In 1997 the cable way was upgraded to state-of-the-art Rotairs that offer you 360° views while you make your way up and down the mountain. These nifty cable cars will carrier you to the top of the mountain in five minutes, travelling at 10m per second. Another handy feature of the Rotairs, is the water tank base. Each cable car can carry 3 000 liters. It serves a dual purpose, transporting fresh water for mountain visitors and a sturdy ballast during windy conditions. Click here to learn more about Table Mountain.

This unique shopping and entertainment hub draws about 24 million people each year. It’s rated as one of Africa’s most-visited destinations. It’s not hard to see why it is so popular. The place has a unique vibe. Buskers are scattered around beating out a tune on their guitar or xylophone. And it features the formidable Table Mountain as its backdrop across the ocean views in the harbour.

The V & A Waterfront stretched over 123 hectares. It’s a unique mixed-use development which revamped the old Victoria & Alfred basins which expanded the harbour capacity. The land was repurposed in 1990 to include commercial trading which included restaurants, speciality shopping, an arts and craft market, the V&A Hotel, a theatre, the National Maritime Museum, and more. Now almost 30 years later, the V & A Waterfront is a firm fixture in the South African economy, bringing in millions of rands every year. Recent additions to the area include the expansion of the Silo district and the Zeitz Museum of Contemporary Art Africa (MOCAA). Read our post Top 10 Things To Do At The V&A Waterfront, you’ll be kept busy for hours (if not days)

It is one of the greatest botanical gardens of the world. Kirstenbosch nestles against Table Mountain’s eastern slopes, stretching over 5.28 km². The area dates back to ancient times, with Stone Age hand-axes and stone implements discovered in the Dell. This area was also home to two Khoikhoi clans, the Gorachouqua and Goringhaiqua. Click here to read more about the history. And make sure you view the historical Van Riebeeck’s hedge. Kirstenbosch was officially founded in 1913. The main aim of the gardens was to preserve the country’s unique flora. This was a worldwide milestone, no other botanical garden had this ethos. Till this day, the botanical garden has a very strong focus on cultivating indigenous plants. The garden covers five out of the six South African biomes. Another unique feature of Kirstenbosch is the Boomslang walkway. It celebrates the centenary birthday of Kirstenbosch (2013). Read more about it here.

The name means “seal island” in Dutch. It is a UNESCO World Heritage Site as well as a South African National Heritage Site. Since the 17th century the island operated as a prison. The most famous prisoner was Nelson Mandela, former President of South Africa and Nobel Laureate. He spent 18 years of his 27 year sentence on the island.

After the end of Apartheid, the island transformed into a living museum, offering visitors a behind the scenes glimpse of prison life. The ferry leaves from the Waterfront, at the dock next to the Nelson Mandela Gateway to Robben Island Museum. An interesting element incorporated into the experience, is that some of the tour guides are former Robben Island prisoners. This will give you priceless insight into life on the island. The tours to the island are very popular, so you need to book ahead of time, especially in peak season (December to February)

It is the country’s oldest wine estate, established over 330 years ago. This world renowned estate formed the foundations of South Africa’s commercial wine industry. In Europe kings and emperors enjoyed the famous wines, including King Louis Phillipe of France and Frederick the Great of Prussia.

Jane Austen called it “a cure for a broken heart” in her novel Sense and Sensibility. And Charles Dickens claimed that a sip will lift your spirit in his novel The Mystery of Edwin Drood. Other famous drinkers included Napoleon Bonaparte, soothing his sorrows during his exile on Saint Helena Island.

The beauty of Groot Constantia, is that you don’t have to travel far to reach this little wine valley. It lies in the Southern Suburbs, just before you reach Hout Bay. You can also travel to it via the City Sightseeing bus, if you want to taste wine without worrying about the driving. Try one of the VoiceMap App Audio Walking Tours to enhance your experience.

In 1488 the explorer Bartolomeu Dias gave it the nickname “The Cape of Storms”. In the daytime it’s a great navigational landmark. But at night when the fog descends, and when the ocean becomes tumultuous, it is not the sailors’ friend anymore.

By 1859 a lighthouse was erected to navigate more safely around this treacherous point. The first lighthouse still stands, towering at 238 metres above sea-level on the highest peak section. This lighthouse is also a centralised monitoring point for the surrounding lighthouses along the South African coastline. Use the Flying Dutchman funicular to travel up to it from the lower station (127 metres above sea-level)

The Cape Point is part of the Cape of Good Hope nature reserve, situated within the Table Mountain National Park. It is a World Heritage Site that is part of the Cape Floral Region. There’s a lot to explore in the reserve. You can create a little mini safari for yourself spotting zebras, bucks, baboons, and more while admiring the local fauna. And stop at one of the rugged beaches for a quick picnic.

Looking to make a simple but super tasty dinner to