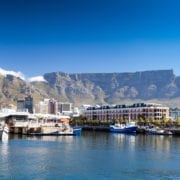 Each year over 23 million people visit the Victoria & Alfred (V&A) Waterfront. The complex features more than 450 retail stores. But it’s so much more than just a shopping mall, it’s also a working harbour with small boats and big container ships meandering in and out. And a big entertainment hub.

Stepping into the V&A Waterfront, a unique vibe enfolds you. It’s almost as if the air buzzes with creativity and a relaxed holiday mode, all year round. While you walk between the main mall and outside shops, you’ll be greeted by buskers filling the air with upbeat tunes.

History of the V&A Waterfront

It has come a long way since starting out as a small jetty in 1654. Jan van Riebeeck built it as part of his mission to establish a refreshment pitstop. But in 1858 a brutal winter storm wrecked more than 30 vessels moored in the make-shift harbour. After this incident, Lloyd’s of London refused to continue insuring wintering ships in Table Bay.

In November 1988, Transnet decided to revamp the deserted docklands around the harbour. The area was transformed into retail and residential development, while the harbour continued operating.

Fun Things to Do at the V&A Waterfront

From shopping, to cultural activities, to entertainment for the kids – there is really something for everyone at the V&A Waterfront! You can spend hours here without getting bored.

There are multi-million-rand apartments tucked away next to the canals running through the V&A Waterfront. If you’re lucky you might spot David Beckham, Madonna or Elton John on their African holiday. The Canal Cruise tour will point out the houses to you, while offering you other interesting facts about the area. Remember to bring your City Sightseeing tour headphones along for the ride. And look out for a pyjama shark while you float along.

The other fun water activity, is a boat cruise out of the harbour. Along the harbour edge you can browse the yachts and boats, deciding what kind of experience you’re looking for. Prices vary from cruise to cruise, there’s something for everyone’s taste and budget. The Jolly Rogers is one of the most popular cruises. Who wouldn’t want to set sail on a real-life pirate ship?

Alternative Adventure: view Cape Town from the air in a helicopter ride

Start with a ride on the Hamleys Express train. The train station is situated across the Cape Wheel and travels all the way to the Watershed. With the right timing, your kids can also meet Hamley & Hattie Bear. Pop in to the store to buy a souvenir of the experience.

The Scratch Patch, situated across the Watershed, is a fun activity for the whole family. Scratch around for semi-precious stones and conclude the adventure with a round of Cave Golf. Round off the fun with a ride on a real Venetian carousel, situated near the Clock Tower. Unforgettable experience for only R10! There are a variety of museums scattered around the V&A Waterfront. These include the Cape Town Diamond Museum, Chavonnes Battery Museum and The Springbok Experience. Combine history and fun with a visit to the Ripley’s Believe It or Not museum. For the art lovers, a visit to the Zeitz MOCAA is a must. It is the largest contemporary African art museum in the world. Once a year, you can enter these museums for free, on Museum Night.

Did you know, according to science the creatures in the aquarium will enjoy your visit as much you enjoy observing them? The Two Oceans Aquarium is home to over 3 000 aqua creatures. If you’re feeling daring, you can dive with the sharks at feeding time. Or if you’re a little less adventurous, feed the fish hiding in the kelp forest. There are only two Kelp Forest Exhibits in the world. And don’t forget to say hi to the penguins.

The Wheel of Excellence is the first of its kind in South Africa, a great way to enjoy a unique perspective of the city. With the 360 view, you can spot both Table Mountain and Robben Island, plus on a clear day you can see all the way to Paarl. Spice up the experience with sparkling wine on an extended experience of an hour and a half.

There are three markets to choose from. The Watershed Market showcases unique craft, home décor and fashion products. At the V&A Food Market you can pick and choose from a variety of food styles, something for every taste bud. The Watershed and V&A Food Market are active every day. On Saturdays from 9am to 2pm, the Oranjezicht City Farm Market offers a selection of fresh food products and homemade crafts. All three markets are covered, so don’t let the weather put you off from visiting.

The Cape Town Comedy Club combines laughter with good food, the dinner theatre features world-class comedians. It is the only one of its kind in Cape Town. The club started out in 2005 as a pop-up, during the Cape Town Festival. Thereafter from 2007 to 2013, the club hopped around between venues across the city, finally finding its permanent home at the V&A Waterfront. It’s situated in the historic Pumphouse building, near the Watershed. Shows are hosted throughout the week.

#8 Paddle in the Canals

Stand Up Paddle boarding or SUP originated in the 1940’s, but it was perfected as a surfing alternative in the 1990’s. The calm canals of the V&A Waterfront are perfect to introduce you to the sport before you venture out into the ocean. Book a session with SUP Cape Town.

Alternative Adventure: A yoga session on a SUP board Where there’s a harbour, there will be seals. The fun-loving animals can be spotted at various points, enjoying a quick dip under the turning bridge or chilling on the special seal platform, situated outside the Shoreline Café.  It was built as a collaboration between the Aquarium and its founding partner, SAPPI. Stop for a quick bite, the restaurant has a great kids play area inside.

#10 Do a Free VoiceMap Tour

VoiceMap is an innovative guided voice tour concept. Starting at the Origin Coffee Bar you will be narrated step by step through the V&A Waterfront to learn more about the “Tavern of the Seas”, as the sailors of old called it. Download the V&A Waterfront tour and enjoy your very own guided tour.