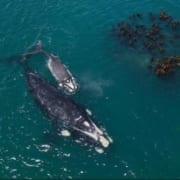 Every year whale season is a big deal in Cape Town, especially in the Hermanus area. People flock from all over the world to view them. Read more about the Hermanus Whale Festival.

Between June and December various whales, including the Southern Right whales, gather in the chilly waters around the coast for their breeding season. Sometimes they arrive by the end of May and stay till early January. But during the whale season of 2018/19, a multitude of whales are still spotted in Table Bay during February.

The Mystery of the Whales Explained

Jean Tresfon, a Marine Conservation Photographer, offers us a possible reason for this strange phenomena. He confirms that whale season is usually during the winter months. But there is another group of Southern Right whales that live up the West Coast. They are currently enjoying a feeding bonanza with the Humpback whales that frequent the area every summer.

In summer the Southeaster is the prevailing wind. It is an offshore wind. This formidable wind blows the surface layer out to sea and replaces it with the icy cold, clean and nutrient rich water from the deep. The process is known as upwelling. Related: 5 of the Best Ways to See Whales around Cape Town

A Feast Courtesy of the Cape Doctor

This process causes the plankton to bloom. And these little organisms is the first stage in the food chain. Next the krill, shrimp, and small fish come to nibble on the fresh feast caused by the wind. And then comes the bigger predators to take part as well. Watch Amazing Footage of 60 Humpback Whales in Cape Town.

Like clockwork several hundred Humpback whales pitch every year for the feast from October to February. They start travelling down to us from up north near Paternoster. They follow the krill and the current to make their way to us down south. Usually in January and February these whales are found off the Atlantic Seaboard, and they slowly continue south past the Cape Point and into the deep.

So normally the Southern Right whales live in the southern ocean and only visit our shores from May to October to mate and calve. But a few of these whales decided to become permanent residents of our waters and stay on the West Coast all year round. They then get sniff in the nose that the food source travelled further south, following the Humpback whales. The other whale friends invited to the feast, are the Brydes whales, also permanent residents of our waters. But they are super shy animals, seldom seen, and they usually only appear on the surface when feeding on bait balls.

If you are fascinated with these gentle giants of the ocean, why not go on a whale watching tour in Table Bay with Ocean Wonder? Sounds like the timing is perfect right now!

We use cookies to ensure that we give you the best experience on our website. If you continue to use this site we will assume that you are happy with it.Ok