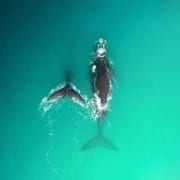 Photo Caption: It is the Whale Festival in Hermanus this weekend. Tag someone you would like to go and spot some whales with. Do you know what kind of whales visit us in Cape Town?

Hermanus is a town located about 115 km southeast of Cape Town. The town is the whale capital of South Africa and has been recognized by the WWF (World Wildlife Fund) as one of the 12 best whale watching destinations in the world. Known as the Cape Whale Coast, this seaside town is famous for its incredible viewings of Southern Right Whales and often regarded as the heart of the whale route. Hermanus, particularly Walker Bay, is the mating and breeding grounds of the Southern Right Whale during the winter and spring months.

The Best Season for Whale Watching in Hermanus

The Hermanus whale watching season runs the entire period between June and December every year. The unique opportunity to watch the Southern Right Whales breaching, sailing, lob-tailing or spy-hopping can happen on any day and at any moment during these months. But the best time of the year to see the whales in Hermanus is around September because it is at this time that the whale volume tends to be at its greatest.

The whales sometimes arrive as early as April, but they usually start arriving at the end of May. The whales arrive in large numbers to breed, give birth and playfully frolic in the sea. During the months of July and August, whale watching varies from year to year. You are, however, almost guaranteed seeing the whales if you visit during the months of October and November. In the past, these whales have been reported to still be in Hermanus as late as early January. Other species of whales that you can see in Hermanus are Humpbacks and Bryde’s Whales. Whale watching boat trips are available from the Hermanus harbour to take you out to sea to get even closer to these incredible creatures. The weather and sea conditions in Hermanus are best in the mornings.

The Hermanus Whale Festival is the only Enviro-Arts festival in the country. It is an annual community event to celebrate the arrival of Spring and the return of the Southern Right Whales to the waters of Walker Bay. The Hermanus Rotary Club started the festival 27 years ago, aiming to provide cultural entertainment for the town’s visitors.

The event puts the Southern Right Whales in the spotlight for recreational, as well as educational purposes. The festival’s home is the town’s old harbour, with the whales making a regular entertaining appearance. The whales take center stage at the festival but visitors can also enjoy live musicians,  street parades, art and craft stalls, and a wide array of food stalls. The Hermanus Whale Festival draws countless visitors every year who enjoy whale-watching and the fun festive vibe.

Looking to make a simple but super tasty dinner to