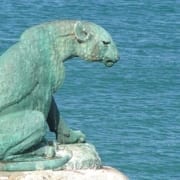 Have you spotted the infamous bronze leopard of Hout Bay while taking a drive along Chapman’s Peak Drive? If not, you should definitely add it to your Cape Town bucket-list. For many, the bronze leopard statue overlooking the coastal fishing town of Hout Bay is both a monumental and mysterious feature. Located down by the water’s edge, this iconic landmark sits proudly atop an elongated rock, isolated among many smaller boulders. While the renowned bronze leopard of Hout Bay has become one of Cape Town’s most beloved sculptures, behind it is a story of great significance that many locals and tourists might not be familiar with.

STORY & HISTORY BEHIND THE BRONZE LEOPARD

The bronze leopard of Hout Bay was sculptured by Ivan Mitford-Barberton, who, after creating it, donated it to the Hout Bay community. Completed in 1963, weighing in at 295 kgs, the statue was placed on its rocky pedestal on the 14th of March 1963 by the Divisional Council. The project was supported by Pepsi-Cola who donated the bronze for the statue. Although many may have spotted it before, some might be wondering what this beautiful lone sculpture signifies – The bronze leopard sculpture is a memorial dedicated to all the wild animals that once called the area home and freely roamed the mountains of the peninsula.

The beautiful Cape Peninsula was once home to an abundance of wildlife that freely roamed its natural landscapes and mountainsides. As Cape Town became more and more populated and developed, the population of Cape wildlife progressively diminished. This eventually led to nature receding, and the Cape’s magnificent wild animals, that once roamed free, migrating to less populated environments to establish a new natural habitat for themselves free from human interference. This completely changed Cape Town’s natural landscapes. According to the Hout Bay Museum, the last leopard spotted in Hout Bay was seen on Little Lion’s Head in 1937.

Locals and tourists visiting Cape Town have the incredible opportunity to spot the last leopard of Hout Bay by taking a drive along one of the most magnificent coastal drives in the world, Chapman’s Peak Drive. As a symbolic reminder, the famed bronze leopard’s gaze overlooks the mountainside where it’s kind once roamed free and will forever live on in history as the only leopard left in Hout Bay.

Many people who pay this beloved Hout Bay landmark a visit will notice that its colour appears more blue than bronze. Over the years, the bronze colour has turned blue because of the oxidation of bronze in the salty breeze of Hout Bay.

LEOPARDS & WILDLIFE IN THE WESTERN CAPE

Although their territory was far larger decades ago, leopards and other wildlife still roam freely in many mountainous regions of the Western Cape. Leopards in the Cape mountains are notoriously elusive and shy away from humans – hence them retreating into the less populated mountainous regions of the Cape. Leopards in the Western Cape can often be spotted on the mountain slopes above Boland and Overstrand towns like Paarl, Stellenbosch, Grabouw, Gordon’s Bay and Kleinmond. When there is less human activity, it is not at all uncommon to see leopards venturing further down the mountain slopes. Giving some lucky locals and travellers the amazing opportunity to spot these majestic wild creatures in their natural habitat.

Leopards are territorial and will constantly look for new opportunities to extend their individual home ranges. They are also inquisitive and like to investigate new areas, especially younger cats that do not yet hold a territory of their own. However, the opportunity to spot these incredible wild animals is getting drastically less. This is not only due to the expanding physical presence of humans, but also our cacophony of sounds (traffic, construction etc) and smells (exhaust fumes, processing plants etc), which collectively act as a powerful deterrent to most wildlife. This ultimately drives them higher up the slopes, far away from any humans.

“In the Western Cape, we are incredibly lucky to still have wild leopards persisting in the mountainous regions. But as human housing and agricultural developments encroaches further on our natural areas, it puts ever greater pressure on these habitats – the homes of our wild neighbours. We should therefore all reflect on how we perceive the wild spaces around us and how we should conduct ourselves in these spaces, knowing that wildlife like leopards and so many other species were there first – and our actions are driving them closer and closer to the edge of existence.”

To add to the threat, the increasing encroachment of humans on nature and the hunting of this sleek predator threaten its survival. The leopard is now listed as vulnerable by the International Union for Conservation of Nature. The elusive and adaptable nature of this scarce predator has helped it to escape local extinction thus far, unlike the Cape lion which vanished forever in the mid-1800s. A few isolated populations, estimated at about 1000 Cape mountain leopards, are still to be found scattered in some of the remote and rugged hills of the eastern, northern and western Cape of South Africa.

Jeannie Hayward from the Cape Leopard Trust further added that “Leopards in the Cape mountains have exceptionally large home ranges; in some instances it is tenfold larger than those in the savannah biome”. She went on to say that “It is of utmost importance to protect these last of the big predators – the apex predators in the Cape mountains – to still roam free in the Western Cape”. While Conservationists are working hard to protect these unique leopards, it is also up to us to do all we can to ensure the survival of our Cape wildlife and leopards and help them thrive in their natural habitat once again.

WHERE ARE THE CAPE LEOPARDS NOW?

The Cape leopards stick to the more remote and rocky hilltops and less populated mountainous regions of the Western Cape. They thus steer clear of the inhabited valleys and populated natural landscapes of the Cape – further reducing chance encounters with these felines.

Beside the aforementioned locations, the Cederberg region in the Western Cape is one of the main pockets where Cape leopards are still found, with only about 35 adults left. That puts the numbers at about one leopard per 120km² over an area of about 3000km². Through the great work and incredible tracking efforts of the Cape Leopard Trust, over 50 Cape leopards have also been recorded in the Boland Mountains, in a core area of 3000km² consisting of nature reserves, game farms and private land.

Another incredible organisation, The Landmark Foundation, which is aimed at conserving leopards of the Cape by working with various landowners, farmers and nature reserves has done some remarkable work in the conservation of these magnificent wild animals. The Landmark Foundation has responded to cases where leopards need to be rescued, rehabilitated, and released, as well as researching leopards found on private land (farms and wilderness areas).

The Landmark Foundation’s projects show that a few leopards are still to be found in the Cape Winelands and Overberg region of the Western Cape. They have also recorder the presence of leopards in the Outeniqua Mountains on the Garden Route as well as the Zuurberg Mountains in the Eastern Cape and in parts of the Karoo. Lone leopards have been spotted from time to time in unlikely places like on Wine Farms in Somerset West and on the Cape West Coast.

WHAT IS BEING DONE TO CONSERVE THE CAPE LEOPARDS?

Both the Cape Leopard Trust and the Landmark Foundation work with farmers to find sustainable solutions that address livestock loses through predation by leopards and other wild predators. Getting private landowners on board, shifting attitudes, and changing responses to locally occurring leopards are key factors in saving the remaining leopards. Both the leopard trust and non-profit organisation are involved in leopard research, collaring and tracking leopards as part of their efforts to understand and manage leopard populations.