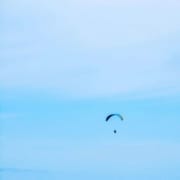 Photo Caption: Tag someone you would love to go paragliding with in Cape Town. Where would you like to launch from? Lion’s Head? Signal Hill?

Do you ever dream of flying over the beautiful city of Cape Town? Paragliding in Cape Town offers you an amazing chance to see the spectacular landscapes. From magnificent mountains to blue oceans, panoramic city views, vast vineyards, fields, and woodlands. Through paragliding, you will get to see the beautiful Mother City from a different perspective.

Paragliding is the recreational and competitive adventure sport of flying paragliders. This non-motorized, foot-launched flying with an inflatable wing is one of the most amazing adventure activities you can possibly experience. In paragliding, the pilot controls the wing via lines attached to the trailing edge of the paraglider. Takeoff and landing usually occur on a hill or mountain.

We miss flying the Lion…

Even if you are inexperienced, you can stil try paragliding, as operators offer tandem paragliding. A tandem glider is specially designed to carry two people and is near twice the size of a regular solo paraglider. Worried for your safety? You don’t need to worry because you will be accompanied by an experienced pilot. You will also be securely strapped into a comfortable flying harness positioned in front of the pilot and connected to the pilot and the glider. The pilot will make sure that the take-off is simple and landing is soft and safe. The paragliding operators only facilitate tandem flying in conditions that allow them to launch and land safely.

Paragliding in Cape Town is mainly conducted from Lion’s Head and Signal Hill. Paragliding from Lion’s Head offers great views of Clifton, Camps Bay, the Twelve Apostles mountain range and iconic ocean views at a maximum elevation of 113 meters. It requires a bit of a hike to get to the launch site but is totally worth the effort.

When paragliding from Signal Hill, you will get to see beautiful mountain views and views of Sea Point, Green Point, Table Bay, and even Robben Island, at a maximum elevation of 295 meters.

Paragliding is a Weather-Dependent Activity

Weather conditions in Cape Town can change very quickly. Paragliding also requires the right amount of wind coming from the right direction to fly. Using the paragliding launch sites of either Lion’s Head or Signal Hill depends on the wind direction.

The actual flight time also depends on the weather conditions on the day. Flights generally last from five to thirty minutes. The pilots will always make every effort to give you the longest and most enjoyable flight possible.

It’s a good day for it. We’ll sort you. #paraglidingcapetown

Other Paragliding Sites Around Cape Town

Aside from Lion’s Head and Signal Hill, you can also opt for paragliding sites located a few minutes from the city center. Sir Lowry’s Pass in Somerset West; Paarl Rock in Paarl, and Fernkloof Nature Reserve in Hermanus also offer scenic views and amazing paragliding experiences.

Feel the adrenaline rush as you take on the most exhilarating flight you can possibly experience in Cape Town!
Visit www.flycapetown.co.za now to book your tandem paragliding adventure.

These milkshakes @pepperclubhotel_ bring all the b

@motherlandcoffee with heart artwork on it, becaus