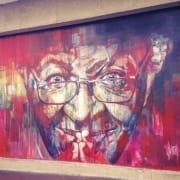 Photo Caption: Capturing a little bit of Archbishop Desmond Tutu’s personality. Another #streetart masterpiece by @brianrolfeart in the heart of #capetown . Do you know where to find this piece in the #cityofcapetown?

Longmarket Street is a unique street in Cape Town’s Central Business District (CBD) which runs the full width of the City Bowl, from the Bo Kaap to District Six. It is also one of the oldest streets in Cape Town and is home to some of the oldest buildings, holding a great position in the history of the city. Besides its rich history, Longmarket Street exhibits a diversified culture and attracts tourists from all over the world, making it one of Cape Town’s major attractions.

Besides the Victorian buildings, thrifty marketplaces and great hangout spots, the street also features astonishing street art works. Street art is becoming a widespread feature of Cape Town, decorating homes and buildings with brightly colored murals. It has become a way to reach a much broader audience than other styles or galleries would allow. The street art of Cape Town depict diverse issues such as human rights and wildlife conservation. One of these works of art is “The Arch”, a masterpiece by the Cape Town renowned artist, Brian Rolfe, whose reputation and status as an artist have grown over the years. Rolfe is fast becoming a force to be reckoned with in the contemporary art world. One can walk past his painting of Archbishop Desmond Tutu and former president Nelson Mandela along Longmarket street.

The crossing is a social SUP event from Small Bay