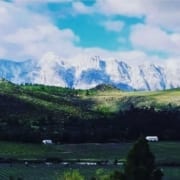 Snow in South Africa remains a fascinating weather phenomenon. Maybe it’s because we’re used to mostly sunny skies and warm days. It’s a great adventure to go snow hunting in winter, and in Cape Town we’re lucky enough to have snow almost on our doorstep. A quick road trip within a three-hour drive, and you can pretend for a moment that you’re driving somewhere in Europe. We’ve sourced the best places for you to see the exciting little white fluffy stuff.

Snow season differs every year but late June to late July you’re mostly guaranteed to see some good downfall. Good thing this period falls over the school holidays! Perfect excuse to stare in amazement at the snow-capped peaks. And there’s nothing more romantic than a weekend getaway to the snowy hills. The best way to stay in the loop with snow in South Africa, is Snow Report SA. They are also active on Facebook, Twitter, and Instagram. If you plan a trip over the weekend, there are great farm stays in the surrounding areas.

Best Places to See Snow in The Western Cape

Here are some of the Western Cape’s best destinations for seeing snow during its wonderful winter season.

The beautiful Cederberg Wilderness area of the Western Cape is one of the top places to see snow in Cape Town. Located about a 2 -3-hour drive from the city of Cape Town, the rocky and rugged Cederberg transforms into the ultimate winter wonderland during Cape Town’s winter season. Instead of its notorious hot and dry summer surroundings, winter in the Cederberg is all about blue skies, snow-capped mountains, and snow-covered landscapes. Making it the perfect place to go snow chasing in the Western Cape with the whole family.

After a particularly chilly cold spell, the high mountain passes, peaks (particularly Sneeuberg), and slopes of the Cederberg becomes completely covered by snowfall. This undoubtedly makes a trip to the Cederberg a must-do winter Cape Town bucket-list adventure everyone should get to experience!

*Tip: Going on an adventure-filled day hike is a great way to see the snow and explore the glorious snow-covered mountains and landscapes of the Cederberg. Snow in the Cederberg is typically forecasted between May and September and can most often be found on the 2 026-metre Sneeuberg, the region’s highest peak, throughout this period.

The quaint town of Tulbagh has become a popular travel destination in the Western Cape, especially during winter when the snowfall season hits. Located just over an hour’s drive from Cape Town, the charming town of Tulbagh is known for its beautiful Cape Dutch Architecture and rich history.

Tucked away between the mountains, Tulbagh is home to countless scenic mountain ranges and open fields that are often transformed into a snowy white wonderland during Cape Town’s winter season. There are also several other farms along its outskirts. As Tulbagh is located fairly close to the city of Cape Town, it’s the perfect escape for an unforgettable road trip or day trip with family and friend – especially if you’re looking to go snow cashing in the Mother City. Located approximately two and a half hours away from the city of Cape Town, the wine growing regions of Robertson and Worcester are known for their snow-capped mountain views during the Mother City’s winter months. Undoubtedly making it one of the best places to see snow in Cape Town. The Langeberg mountain range typically receives the highest frosting of snow during winter, particularly its highest peak, Keeromsberg, which lies 15 km to the northeast of Worcester.

Besides exploring its snow-covered surroundings there is so much more to do, see and experience in Robertson and Worcester. From trout fishing in the lakes to sensational wine tasting (Robertson and Worcester are known as two of the Western Cape’s top wine growing regions after all) and historical winter walks through the town – there is something for everyone to enjoy!

Another top place to see snow in the Western Cape is the picturesque fruit-growing town of Ceres. Ceres is located approximately 135km outside of Cape Town, near the Matroosberg Mountains. It is home to the second highest peak in the province as well as the infamous South African Ski Club. The snow-covered winter wonderland of Ceres is all about encouraging its visitors to have as much fun as possible by offering a variety of adventure experiences such skiing, snowboarding, snowman building and snowball fights of course! However, when the snow gets really thick, you may well need a 4×4 to get around and explore.

Besides being the ultimate destination to see snow during Cape Town’s winter season, this bucket-list Western Cape escape boasts the second highest peak in the province, the Matroosberg Peak.

The Matroosberg Nature Reserve has even rigged up a private ski-slope! The Matroosberg Peak is located within the Matroosberg Private Nature Reserve, and it’s here where you will find the renowned Ski Club of South Africa and its thrilling ski slopes. So, if you’ve fallen head-over-heels in love with skiing on your trips to Switzerland, Colorado, or Canada, you can now satisfy all your ski cravings right here in Cape Town’s own backyard.

In a good winter season, you can make your way through the snow with a regular car on the lower slopes. However, during heavy snowfall you will need a 4×4 to access the slopes and navigate your way up to the higher Matroosberg peaks if you’re keen to do some exploring and adventuring. The reserve has its own official ski slope and hut. There’s a wide range of accommodation options available in the area, something for every budget.

In addition to the magnificent Kogelberg, the Boland Mountains also span over the Jonkershoek, Assegaaibosch, Hottentots, and Limietberg reserves. This means nature lovers and winter snow chasers have a wide variety of spectacular nature reserves to explore all right within reach of each other.

The Hex River Mountains are the second highest mountain range in the Western Cape. It is therefore no surprise that their sandstone 2,000-metre-high peaks are frequently covered by snow during Cape Town’s winter season. Located between the towns of Worcester and De Doorns, approximately 120km to the northeast of Cape Town, the Hex River Mountains’ highest mountain is the Matroosberg. Which, besides snow-covered landscapes and mountain peaks, offers visitors 2km of ski slopes – providing you with the very best of everything for an unforgettable bucket-list experience.

Declared a World Heritage Site in 2004, Swartberg Nature Reserve stretches 121,000 hectares between the Klein and Groot Karoo. It borders the Gamkapoort Nature Reserve to the north and the Towerkop Nature Reserve to the west. The Gamkaskloof Reserve (otherwise known as Die Hel) is home to a profound heritage including San rock art and artefacts found in caves throughout the reserve. It also boasts a rich and incredible diversity of indigenous vegetation, including Renosterveld, mountain fynbos, and spekboom veld. This makes it any nature lover’s dream destination to explore.

Situated on the other side of Ceres, this cherry farm is often powered white during winter. Sometimes it’s just the tips of the Matroosberg surrounding it, but in a good season the snow lies thick on the farm. The farm offers both camping and self-catering accommodation options.

This beautiful farm is ideal for an overnight stay on your way to the snow hunting.

During high snowfall seasons you might wake up to a white wonderland, with the magnificent mountains as a backdrop. If not, you will be close enough to the other snow-rich areas a short drive from the town.

Another great overnight option in the Tulbagh area. It’s centrally located to offer you the best chance of driving to see the snow in the surrounding areas. Often formidable peaks surrounding the farm is snow-capped in the heart of winter.

This guesthouse in the Nuy Valley used to be an 19th century wine cellar. It was revamped into two stunningly luxurious apartments. Looking out onto the magnificent Langeberg Mountains, it’s a great spot to celebrate your successful snowhunting endeavours.

This spot is popular with hikers and rock climbers.  Situated 26km from Clanwilliam on the way to Wupperthal village, it’s ideal for camping or glamping.

Tucked away in the beautiful Agter-Pakhuis valley, it will give you the opportunity to savour the moment of your glorious snow hunting.

It’s not every day that you get to stay in a hundred-year-old farm house. This immaculately restored humble abode is located at the foot of the Matroosberg Mountain, and it’s fitted with a few cosy comforts to heat you up during an icy winter moment.

Easily accessible from Ceres, this lovely mountain retreat is only 6km from the town. It is nestled between orchids, at the foot of the Skurweberg Mountains. Perfect spot to stay after you’ve visited the Matroosberg Private Nature Reserve.

A post shared by Seven Oaks Wine and Cottages (@sevenoakswineandcottages)

These self-catering cottages are situated on a 63-hectare active wine farm. Located in the Breede River Valley, the little cosy cottages offer you glorious mountain views.

The Best Luxury Glamping Getaways in the Cape