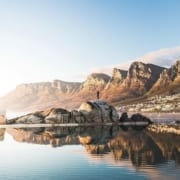 With such a spectacular view, paired with the cool and refreshing ocean water, there is nothing quite like being sun-kissed, salty-haired, and blissed-out while soaking up the glorious Cape Town sunshine and spending the day at Maiden’s Cove. Maiden’s Cove has two amazing tidal pools. The first tidal pool is located between Glen Beach and Camps Bay Beach. Boasting great braai and picnic facilities it is ideal for a fun-filled and leisurely day out with family and friends. Sun, sea, scenic views, and a whole lot of exciting things to do – What more could you ask for?

Perched between the scenic stretches of Clifton 4th and Glen Beach, Maiden’s Cove second tidal pool is flanked by the Atlantic Ocean, the Twelve Apostles Mountain Range, and the verdant greenery of the mountains of the Western Cape. Undoubtedly making Maiden’s Cove tidal pool a scenic wonder and sought-after spot for a day of ocean-front relaxation, swimming, or a quick dip in the chilly Atlantic (as some may put it). Maiden’s Cove tidal pool is also surrounded by massive rounded boulders that protect the tidal pool from the waves and make for excellent sun-tanning spots.

Little ones are spoilt for choice when it comes to finding spots to explore amongst the rocks and surrounding boulders. In addition to adventuring and exploring, searching for sea shells, splashing about, and generally having a grand ol’ time, Maiden’s Cove also has an amazing spacious lawn / grass area. This is great for keeping the kiddies entertained, sitting back and taking the load off, as well as the perfect place to have a braai or fabulous picnic on a lovely weekday or weekend afternoon.

Maiden’s Cove also attracts divers as it is also one of the best free-diving spots in the Cape Peninsula. During the months of June to December, dolphins and whales are frequently sighted in the shorelines of the cove. Additionally, Maiden’s Cove offers a stretch of fine white sand, free parking areas, and toilets. It is also conveniently located near restaurants, bars, and cafés.

In the background is the Twelve Apostles mountain range, which is stretch of mountainous rock formations and is one of Cape Town’s most famous landmarks. The mountain range is named Twelve Apostles because of its twelve distinguishable buttresses. It extends from Table Mountain, above Camps Bay, in the direction of Hout Bay, to Llandudno.

Maiden’s Cove is definitely a must-see spot in Cape Town. So, bring your loved ones and don’t forget to take your picture-perfect shots of the boulders, tides, and the beautiful sunset with the magnificent Twelve Apostles as the pefect backdrop.

View our full post on the 19 tidal pools of Cape Town.

Where: Victoria Road, Camps Bay (the two largest tidal pools at Maiden’s Cove are located between Glen Beach (a favourite for surfers) and Clifton 4th Beach.)