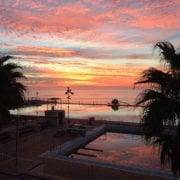 I love swimming – I always have. When I was a child, we used to take the train from Grahamstown in the Eastern Cape all the way to Joburg to visit my grandmother. There I would run the gauntlet into her garden past the homicidal sausage dog, Curly Wee (yes, actually) but it was worth it, because if I could make it past him alive I would get to… The Pool. Flanked by vibracrete swans, adorned by lilos and reeking of chlorine, it was a suburban oasis. I loved that pool. I swam in it until my lips were blue and my fingers looked like mauve prunes. Most afternoons, my long-suffering, non-swimming mother had to drive me out of the water with dire threats as the daily thunderstorm brewed and lightning was imminent.

I still love swimming, though these days I’m a bit more discerning about where and how I do it. I’m not as quick to throw off my clothes and leap into any available body of water wearing nothing but two small stripes of lycra, and I prefer somewhere that I’ll be left in peace. Luckily, there are some magnificent places to swim in Cape Town, some more secret than others, which suit my needs perfectly. There are plenty of sea swims (and that’s a story for another day) but for now I want to stick to pools: here are some of the best Cape Town swimming pools open to the public.

I have to start with my all-time favourite, the Sea Point pool. Can there be a better poolside view than there is from this large, salt water swimming-hole, which seems to continue out endlessly into the Atlantic Ocean alongside it? There are four pools, including an Olympic sized main pool, a paddling pool for kids and a diving pool with a fearsomely high diving board which is open to the public during high season when there are lifeguards on duty.

For all this you’ll pay the modest sum of R25.30 a day for adults, R13.20 for children or nothing at all if you are a senior citizen or have a disability. Not surprisingly, the Sea Point swimming pool is one of the best-used facilities in Cape Town, frequented by a pleasingly diverse range of people. During weekdays it tends to be quieter, with older visitors swimming or sunning themselves convivially on the lawns, and on weekends it is teeming with children from all over greater Cape Town. High season runs from the 1stof October to the end of February, when the opening hours are extended to allow a full twelve hour day from 7 to 7. And because it is filled with (treated) sea water it is open despite the drought. The pool is set near the far end of the Sea Point Promenade, another wonderfully well-used bit of public open space and one of the few places in Cape Town where one can walk alone for a good solid hour or two, with spectacular views, in relative safety. People-watching makes for excellent sport here, but if you’re keen on more physical activity you can hire a bike, run, skateboard, play soccer or putt-putt, or even land your paraglider on the grass. Once again, the promenade is a worth a story all on its own. On Sunday evenings, on the outlook next to the pool, people gather informally for a spot of Latin dancing while the sun sets over the sea, or to watch others dance while enjoying some food from the street stalls.

But back to swimming… If it’s too chilly to brave the elements – or if a heated pool seems like a more relaxing prospect – the Long Street Baths is another of Cape Town’s open secrets.

Established well over a century ago in 1908, the Long Street baths is worth a visit just for the feeling of stepping into a different era. Yes, it could perhaps do with a spruce-up, but the genteel tattiness is part of its charm. As you come in through the original imported iron turnstile and into the light, old-fashioned lobby, it’s a little like walking onto a set from The Unbearable Lightness of Being or Hotel Budapest. A staircase leads up off the lobby to a spectator’s balcony where you can look down onto the pool and the murals of local scenes that flank it. Even more like a film set are the changing booths next to the steam room to the left of the lobby, in which there are small slatted wooden beds on which one can apparently “take a break from the heat”. At least that’s what I was told. Unfortunately the steam rooms are still closed due to the drought.

You access the pool itself through the change rooms, which are at the back of the ground floor lobby as you walk in. These are basic, and apparently not always scrupulously clean but perfectly adequate. And the pool is magnificent – several lanes wide, 25 meters long and an inviting bright blue. The room is vast, with plenty of natural light and raked seating for spectators or resting swimmers. The facility belongs to the City of Cape Town and the entrance fees are the same as at Sea Point.

Both the Sea Point pool and the Long Street Baths have been around for a long time and are well-known and well-loved. It took a dip into Justin Fox and Alison Westwood’s wonderful book Secret Cape Town to lead me to a much more secret swim in the Mother City.

Although it’s open to the general public between 10am and 3pm daily, very few people seem to know about the heated indoor pool at the Wynberg military base. Swimlab swim school have their home-base here, but when it’s not being used by them, this well-maintained, 25-meter long pool is the perfect place to go to train or just to swim a few laps.

The Wynberg Aquatic Centre is inside the military camp on the corner of Scoble and Buren Roads. The camp is a very strange place, a secret suburb-within-a-suburb, where you feel like you’ve been transported back in time: it’s all a bit “Toto, we’re not in Wynberg anymore”. Pre-fab buildings give it an outback feel, and everything seems oddly still and quiet.

The pool is not easy to find. There are no signposts at the entrance, so you have to be in the know or ask the guards at the boom – and even they had to consult amongst themselves. They told me to take a left at the entrance, take the right fork in the road and pass the tennis courts. I missed it the first time: again, there was no signage and the gate was unattended and looked like it was locked. I went around the block, came back to the same spot and parked. When I tried the gate I found I could open it. I eventually found the lone attendant and had a wonderful, peaceful solo swim with the perfectly-heated pool all to myself for the princely sum of R10: highly recommended! It is a lonely place though, and you might prefer to take some company rather than going by yourself. That said, it’s a pool for training in, not for a picnic or a poolside chat, so find someone who’s as keen on an adventurous secret swim as you are.

Emma van der Vliet is the author of Past Imperfect and Thirty Second World, both published by Penguin SA.

What a beautiful view of the mountains from Rooi E

A city like no other 🏙️⁠ ⁠ Photo by @suns

@crofters_kitchen is a celebration of true South A

A stunning view of the sunset from Milnerton Feal