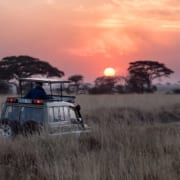 Both the Kruger National Park and the Pilanesberg Game Reserve offer a wide range of activities in an outstanding setting and promise visitors an incredible wildlife experience.

Below the differences between the two wildlife experiences so that you can make an informed decision about the best one to suit your needs.

Pros and Cons of the Kruger National Park

More about The Kruger National Park

The Kruger National Park is one of the best places to go on a safari in South Africa. It’s world renowned for its exceptional biodiversity. It is also one of the largest and most popular natural attractions in South Africa. The park is home to the big 5 which includes leopard, buffalo, rhino,  lion, and elephant.

Another popular tourist attraction in the park, is the Kruger to Canyon Biosphere. This is an area that is designated by the United Nations Educational, Scientific and Cultural Organisation (UNESCO) as an International Biosphere reserve.

How big is the Kruger National Park?

The Kruger National Park covers an area of almost 19, 485 Square Kilometers or 2 million hectares. It stretches across the province of Mpumalanga and Limpopo in the northeastern region of South Africa. From north to south it extends 360 km (220miles) and 65 km (40miles) from east to west.

The Great Limpopo Transfrontier Park is home to more than 85 different animals and 2000 species of plants. It’s formally one of the first established peace parks of South Africa. The foundation of Peace Parks sees the importance of developing and conserving the important conservation areas and keystone species. Their goal is to maintain the biodiversity and to conserve the site’s ecosystem.

The Kruger National Park was formerly called the Sabie Game Reserve. The area in between the Crocodile and the Sabie Rivers was designated as a wildlife protected area. This meant hunting was not allowed. The uncontrolled hunting was causing a massive decrease in game numbers. Certain animal species faced extinction without state intervention.

Transvaal Republic’s former president, Paul Kruger drove the urgency to provide a sanctuary for South Africa’s wildlife. But it took 12 years for the region to be proclaimed a protected wildlife area. This is why it is called the Kruger National Park, to honour Paul Kruger.

In May 1962, the National Parks Act was proclaimed. The Shingwedzi Game Reserve and Sabie Game Reserve was then combined to become the Kruger National Park. The first warden was James Stevenson Hamilton. He made a significant impact on the management of South African wildlife and conservation. You can go and visit the Stevenson-Hamilton’s Memorial Library situated in the Skukuza Rest Camp. It houses old photographs and journals of the influential game ranger during his early days as a warden.

Where is Kruger National Park Located?

The Kruger National Park is located in the North Eastern part of South Africa, which is a 5-hour drive from Johannesburg. Most tourists fly into OR Tambo International Airport in Johannesburg. add other travel options

When is the Best Time to Visit Kruger National Park?

The Kruger National Park and Lowveld area is subtropical, which means you can enjoy tours throughout the year with pleasant days and a good view of the game.

However, if you do not want to be bothered by large crowds, then avoid booking accommodations during the busy holiday seasons and during the annual free access SANparks week in September.

The Kruger National Park’s busiest time is when the rest camps are congested during school holidays. This includes, Easter holidays in March/April and the end of the year break in December/January. The best time to visit is during the cold winter months between May and September.

The Limpopo and Mpumalanga provinces experience bountiful summer rain. During the winter, the wooded thickets and grasslands are dry and not as thick compared to the summer months. It’s easier to spot herds during this time, especially at dams, rivers, and popular waterholes. The water holes are packed with game at sunrise and sunset.

You can expect the following weather conditions:

Where is the Best Place to Stay in the Kruger National Park?

There is a wide variety of accommodation options to choose from, with camps scattered across the reserve.  Here are some important reminders to take note of:

Basic Types of Accommodations at the Kruger National Park:

The Pilanesberg Game Reserve is on the list of the most popular game reserves in South Africa. It’s located in a malaria-free area in South Africa’s North West Province, and it’s also very close to Pretoria and Johannesburg compared to the Kruger Park. It’s central location makes it the ideal destination for travellers who want to see the Big 5 while explorating South Africa.

How big is the Pilanesberg Game Reserve?

As part of a long term plan to establish a well protected wilderness corridor between the Pilanesberg Game Reserve and the Madikwe Game Reserve, 20 Square Kilometers of land has been added to the north western side of Pilanesberg. Plans are currently under review to drop the fences between several privately owned neighbouring game farms, which will dramatically increase the size and value of the game reserve.

In the late 1820’s the peaceful existence of the Tswana tribe was shattered when Mzilikazi took over the region. The Mzilikazi sought refuge in the Pilanesberg Game Reserve from his rebel Zulu warriors who had fled the wrath of the Zulu king, Shaka. They destroyed all the Tswana villages and crops.

The Tswana people were forced to live under the rule of the Ndebele for a period of time. Missionaries were considered the first European settlers in the area. They established a mission station in the northwestern part on a farm called Driefontein, which was jammed in between a large section of land traditionally owned by the Bakgatla Tribe.

The southern part of the Pilanesberg Game Reserve was originally an agricultural land, which was sold to farmers by the Transvaal Government during the 1860s. The farmers were in need of a permanent water source, so they built a Mankwe dam, which is the reserve’s biggest water reservoir.

In the 1960’s the farms were bought back by the government and members of the Bakubung tribe were resettled on the land. After reclaiming the land, it was then given to the Bophuthatswana, which was made a large Bantustan or Homeland that was established under the South African apartheid government. In 1979, the Pilanesberg was eventually reclaimed as a wildlife reserve by the Bophuthatswana authorities after initiating a project that re-introduced wildlife to the region.

Where is the Pilanesberg Game Reserve Located?

The Pilanesberg Game Reserve can be found in the North West Province of South Africa. It lies on the southern border of Botswana and is fringed by the Kalahari Desert. It’s a comfortable 2 hour drive away from Johannesburg, which makes it the ideal spot for a day tour or a short stay.

When is the Best Time to Visit the Pilanesberg Game Reserve?

The weather in the Pilanesberg Game Reserve is similar to that of the Kruger National Park. The North West Province also has a subtropical climate, although its proximity to the southern Kalahari Desert means the temperature during winter nights are a lot colder compared to the Kruger Park.

You can expect the following weather conditions:

Rates and Time Schedule at the Pilanesberg Game Reserve

Entrance Rates: Pilanesberg Tariffs are per vehicle and per person. Citizens of South Africa also need to show proof of identification to substantiate citizenship.

Where is the Best Place to stay in the Pilanesberg Game Reserve?

Budget travellers and families will find a variety of accommodation options to suit every budget, including self catering, bed and breakfast, and chalet options.

Basic Types of Accommodations at the Pilanesberg Game Reserve: