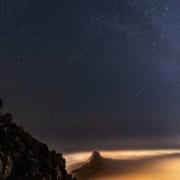 Photo Caption: Have you ever hiked up #tablemountain or #lionshead at night?
What are some of the items that are critical to take with you?
We love this epic photo of below the night sky by ? @reverthex_. Give him a follow for more epic photos

Firstly, the Table Mountain section: Signal Hill, Lion’s Head, Table Mountain, Devil’s Peak, the Twelve Apostles and Orange Kloof. Next the Silvermine-Tokai section: it runs northwest-southeast across the Peninsula from the Atlantic seaboard to the False Bay coast, covering Constantiaberg, Steenberg Peak and the Kalk Bay mountains. And lastly, the Cape Point section: the most southern area of the Cape Peninsula. The two well-known landmarks of the Table Mountain National Park are Table Mountain and the Cape of Good Hope.

The Most Famous Table

The famous Table Mountain is a flat-topped mountain forming a dramatic backdrop to Cape Town. This prominent landmark overlooking the city is not only the country’s most photographed attraction, it is also one of the New 7 Wonders of the World. The peak of the mountain reaches 1,086 meters above sea level., It offers the most magnificent views of the city, Table Bay, Robben Island, and the Atlantic seaboard.

The Cape of Good Hope is at the southern tip of the Cape Peninsula. It’s about 2.3 kilometers west and a little south of Cape Point, on the south-east corner. In history, the Cape served as a stopping point for trading ships sailing between Europe and the European colonies in the East. Today, it is one of the top tourist destinations in South Africa. The Cape of Good Hope Nature Reserve is famous for extraordinary land formation, diverse fauna, and unique flora.

When exploring the Table Mountain National Park (TMNP) a lot of hikers enjoy adding the extra challenge of hiking at night. The full moon hike up Lion’s Head is a highly popular monthly event, and some hikers also enjoy tackling Table Mountain at night.

You must be extra vigilant when embarking on a night hike. Both mountains have claimed many lives over the years. Firstly, you must stick to the designated paths to ensure your safety. Next, make sure you hike with a group of people, at least four. It’s advised to keep your group to maximum ten people, especially when hiking Lion’s Head for the full moon.

During peak season both Table Mountain and Lion’s Head are extremely popular. With the increase of hikers, it can become very tedious to ascend and descend the routes. Unfortunately crime incidents also increase during this time, so make sure you remain vigilant on your hike.

Especially during the full moon hike the SANParks rangers will keep track of the amount of people ascending the mountains, and turn people away if capacity has been reached. This is for your own safety and the safety of others.

If you want to hike up Table Mountain during the full moon, make use of the Platteklip Gorge route. This is the easiest track up the mountain, and the safest one to embark on at night. It has a well-constructed trail with rock steps leading up the front face of the mountain. Although it is the easiest route, it is very steep and must be approached with caution after dark.

The road to Lion’s Head is closed during the full moon hike. This is to ensure easy access for emergency vehicles, in case of an incident. You can park at the Kloofnek parking, situated on the corner of Tafelberg and Signal Hill road.

After an incident, contact SANParks as they collect information in order to prevent future incidents. In the case of a crime committed, you must also report it to the closest police station.

It is advised to carry the following items with you when embarking on a sunset/night hike up Table Mountain or Lion’s Head:

Tips to Hike up Table Mountain or Lion’s Head Safely

Don’t hike alone: there is safety in numbers, not only to fend off crime, but also in case something happens during the hike. If you are the only one in your group of friends who enjoys hiking, why not check out our post about the Top Five Hiking Groups in Cape Town.

Stick to the path: if you’re a regular hiker, it could be tempting to spice up your hike by exploring uncharted territory. But rather keep the adventure for the daytime, even if it becomes frustrating when you have to slow down during busy patches.

Wear closed hiking shoes: the Lion’s Head hike is rated A, and might seem an easy stroll for many. But rather wear proper closed shoes to ensure that you have the best grip on the rugged terrain.

Prepare for weather changes: you might think that it was a sweltering hot day and surely it will still be hot on the mountain. But Cape Town’s weather is notoriously fickle, and the temperature drops rapidly once the sun goes down. It is advisable to be prepared for anything, including rain and icy winds.

No toilets, no taps: pace yourself with the water consumption, unless you are comfortable with outdoor bathroom moments. Also, you can’t top up your water bottle, so make sure you take enough water along to last the entire trip.

Charge your phone properly: make sure your phone is fully charged for the trip and remember to store the emergency numbers before starting your hike.

Keep someone informed: before starting your hike, tell a family member or friend about your hike so that someone knows about your whereabouts, should something go wrong during the hike.

Check the weather: if you are an inexperienced hiker, rather avoid hiking if rain is forecast. Once the rain comes down, the rocks and trail becomes slippery and harder to manoeuvre. Strong winds can also make the hike very challenging.