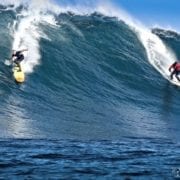 With surfing available almost year-round and an abundance of surf spots to choose from, Cape Town is one of the best destinations in the world for surfing. Whether you’re a newbie or a pro surfer, there are options for everyone no matter how the wind is blowing. However, if you’re an experienced surfer looking for your next great spot, Dungeon’s Beach is one of the most extreme and exciting surfing spots in South Africa.

Dungeon’s Beach is a well-known, world-famous surfing spot. It’s located at the foot of the Sentinel Mountain, just off the coast of Hout Bay. The beach is only accessible by a 15-minute boat ride from Hout Bay Harbour. It is one of the best surfing spots for advanced and experienced surfers, and waves of up to 60-feet have been ridden. Winter is the best time of year to surf. But both locals and world-traveling surfers alike frequent the challenging spot year round.

Dungeon’s waves were first ridden in 1984 by Cape Town surfers Pierre de Villiers and Peter Button. Today the spot has been made famous by Red Bull Big Wave Africa. The contest is held at Dungeons every year in winter. It attracts the world’s top national and international surfers, with contestants surfing by invitation only. American surfer Greg Long is the only surfer in history to score a perfect 10 on a Dungeons wave (Red Bull Big Wave Africa event, 2008). He is considered the best big wave surfer in the world.

The best time to surf at Dungeon’s is during low tide, where waves start breaking from 8 to 10 feet. Paddle surfers rarely frequent the beach outside of the Red Bull Big Wave Africa event. But tow surfers can be found at the beach frequently. Despite the reputation as one the most shark-infested places in the world, Dungeons Beach still draws surfers looking for a adventure.

Who would you like to go on a helicopter trip with

Our 2nd local Cape Town startup we are excited to