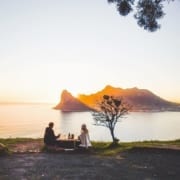 Photo Caption: Do you know where this epic picnic spot is?

Tag someone you love watching the sunset with!

Chapman’s Peak Drive is a 9-kilometer road running from Noordhoek to Hout Bay. With spectacular 180° views of the Atlantic coastline, a towering mountainside hugging the road and a total of 114 curves, it is one of the most scenic drives in Cape Town.

Chappies, as the locals call it, was planned in 1915 and opened in 1922. The road was regarded as a major feat of engineering. In 2000, Chapman’s Peak Drive was officially closed to traffic due to falling rocks which resulted in death and injuries. After intensive design and reconstruction, the road was re-opened to traffic as a toll road on 20 December 2003. Since then, it has remained open with only temporary closures for routine maintenance and during dangerous weather conditions.

With its stunning views, Chapman’s Peak Drive is surely one of the most spectacular coastal drives in the world. Along the road are a number of picnic spots wherein you can safely pull over and simply savour the panoramic views of the mountain and the Atlantic Ocean. There are about 60 picnic tables offering a tranquil place to spend a wonderful picnic with your family and friends. Look out for whales and dolphins from some vantage points.

So, pack a picnic basket, drive along Chappies, stop at one of the picnic spots and enjoy a great picnic with the best views nature has to offer. If you want to create a really decadent experience, why not order a picnic experience from Dial-a-Picnic.