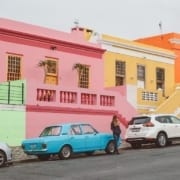 Photo Caption: Do you know where these iconic painted houses are in Cape Town? We think this blue car might be one of the most photographed in Cape Town.

Formerly known as the Malay quarter, this distinct neighbourhood is one of the most photographed places in Cape Town. Its colorful picturesque terraced houses, which are a mixture of Cape Dutch and Cape Georgian architectural styles, and steep cobblestone streets make it the perfect Instagram-worthy backdrop.

This vibrant neighbourhood is one of the oldest urban residential areas in Cape Town, situated at the foot of Signal Hill. Contrary to its very colorful houses today, the Bo-Kaap has a long gray history of discrimination and slavery. Most of the families living here today are descendants of the slaves,  imported by the Dutch during the 16th and 17th centuries. A majority of the slaves came from the Malay Archipelago. In the 1760’s, Jan de Waal built several small rental houses for his slaves. The houses were called “huurhuisjes” (small hired houses) and the area was known as Waalendorp. Back in the day, he insisted that all the houses had to be white. Following the liberation in 1834, the slaves painted all the houses in the neighborhood with bright colors as an expression of their freedom. Since then, the Bo-Kaap has been home to people of various origins and religions. It has also become the traditional home of Cape Town’s Muslim community since the second half of the eighteenth century. There are at least nine mosques in this neighborhood. The oldest is the Auwal Mosque in Dorp Street, built in 1794. This community is not only a symbol of freedom but also has invaluable historical and heritage value.

The colorful houses with invaluable heritage value, attract many visitors, making it one of Cape Town’s most popular tourist destinations. Extended! We have some great news. Many of our lo

Flowers and a gorgeous view on a beautiful summer