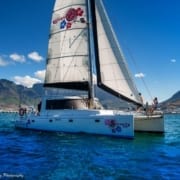 The Mother City wraps itself around the ocean, and exploring the city from the waters will offer you a unique perspective. Whether you embark on a sunset cruise, or go to observe the residents of an island on the Hout Bay side of the city – you will not be disappointed.

There are a variety of tour operators specializing in cruises along the coast. The majority of the cruises launch from the V&A Waterfront, or Hout Bay Harbour. We’ve sourced the best cruises in Cape Town for you to embark on.

As you walk along the quay, you will find a variety of cruise options. Many of the yachts depart throughout the day, but a sunset cruise is the most spectacular option. Choose between catamarans, vintage-inspired sailboats, and stylish little cruise liners.

Cost: prices dependent on company, ranging between R160 to R350

Along the Waterfront quay, you will spot the Jolly Roger pirate ship. Who wouldn’t want to go sailing on a pirate ship! The boat is popular with both adults and children alike. Staff dress up as pirates to complete the experience. It’s a notorious party boat, with a bar area and DJ (on request), a dancing pole, and private lounge. Sail along the Table Bay coastline, with views of Granger Bay, Bantry Bay and Clifton, as well as Robben Island. The ship can accommodate up to 75 people.

The world famous island lies in the Table Bay, accessible from the V&A Waterfront on a ferry. These ferries were previously used to transport prisoners to the prison on the island. Once you step ashore you can join a guided tour of the island. The historical sites include Robert Sobukwe’s house, as well as Nelson Mandela’s prison cell. The informative tour will offer you a chance to immerse yourself in the 500-year-old history of the island. Look out for seals and dolphins next to the boat when you are travelling there and back.

Drumbeat Charters offers a few different cruise options from the Hout Bay harbour. This one travels past Duiker Island, also known as Seal Island, and continues towards the eerie Maori Bay. It is famous for numerous shipwrecks. The cruise focuses specifically on the Bos 400.

Another trip offered by Drumbeat Charters, this one offers you a unique perspective on the famous route meandering from Hout Bay to Noordhoek. It’s spectacular by car/bicycle, but the view from below is definitely worth it too. See if you can spot the hidden caves along the way. A bonus outing includes passing by Seal Island before heading back next to the Chapman’s Peak coastline.

If you are solely interested in observing the Cape Fur seals in their natural habitat on Duiker Island, there are a variety of tour operators specializing in this. This cruise will take you as close as possible, to watch (and smell) the friendly furry sea mammals. If you book between January and March, you’ll catch the moulting season, which gives you the best opportunity to watch the seals. Travel from the Hout Bay Harbour straight to the Seal Island.

Cost::  prices dependent on company, ranging between R100 to R350

Life is a collection of moments like this ⁠ ⁠

From sea to shining sea ❤️⁠ ⁠ Photo by @ad

It's always worth taking the scenic route 😍⁠

All good things are wild and free 🌇⁠ ⁠ Phot

How many seals can you see in this photo? 🤔⁠

Nothing to lose and a world to see 🌊⁠ ⁠ Pho