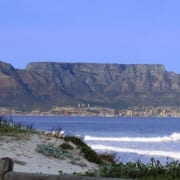 The magnificent Table Mountain has a lot of mysteries waiting to be discovered by the curious traveler. Every year more than 800,000 tourists and locals ascend the formidable mountain. It was also included in the world’s new 7 Wonders of Nature in 2012.

There are many legends surrounding the mountain. We tried to unravel some of these tales, and this is what we discovered: In the 1400’s the pursuit for world power ensued an upsurge of sea voyage. Many sailors attempted to navigate their way around the “Cape of Good Hope”. Regrettably, the rough waters around the mountain didn’t seem to agree with the thought of sea travel and caused chaos. The growing number of lost ships led to a series of fables.

“Adamastor the Fuming Greek god” Countless Portuguese sailors tried their best to voyage through tumultuous waters towards India, but many sadly failed. The idea for this god was inspired by a poem, written by Luis De Camoes. The mountain was portrayed as a spiteful, enraged, and aggressive titan who wouldn’t allow anyone to pass through the area, without being caught up in the rough seas.

The belief is that after many years of pandemonium the troubled titan was finally overpowered, allowing sailors to travel around the beautiful rounding of the African continent’s tip. The first person considered to cross the ocean all the way to India was Bartomeu Dias and later on Vasco De Gama. Today, all that is left of the mysterious titan is a quiet mountain keeping watch over the city.

“Janus the Double Headed Roman God” Once upon a time, Table Mountain was believed to be a physical manifestation of Janus the Roman God. In mythological stories, Janus was able to unravel the future and look through the past. At the same time Janus was also considered to be the caretaker of transitions and humble beginnings.

So in the form of Janus, it was believed that Table Mountain controlled and safeguarded the African continent’s tip from those who passed from the east and west side, as well as transition from the old world to the new world.

“The Watcher of the South” This is one of the most popular myths with origins from South African soil. The Xhosa folklore tells the story of Qamata, a god responsible for creating the world. The mighty god was in the process of forming dry land when a sea dragon named Nkanyamba tried to stop him.

This led to a big struggle and caused the Earth Goddess (Qamata’s mother) to help her son by making four giants to defend the four corners of the world. Once the giants died and enough land was formed, all of them were turned into stone to watch over the four points of the earth forever. The biggest and the strongest giant of the south was named Umlindi Wemingizimu or otherwise known as the Watcher of the South, today known as Table Mountain.

“The Smoking Contest with an Unlikely Partner” It’s unclear where this myth comes from but many believe that the Cape Malays were involved in the making of this story. The fable includes a retired Dutch pirate, called Van Hunks. He loved smoking his pipe, on the side of Table Mountain. One day, while sitting on his favourite spot, the Devil joined him and challenged him to a smoking competition.

Both Van Hunk and the Devil refused to give up, they puffed and puffed for days. Slowly a cloud of smoke started rolling down the mountain side. The Devil realised that Van Hunk was beating him. He was not happy about this. The next moment both men mysteriously vanished in a bright flash of lighting. All that was left behind was their huge cloud of smoke. The spot of the smoking contest was called Devil’s Peak. Click here to read more about the “Tablecloth” phenomena. There are still many unraveled tales that surround the mysterious Table Mountain, including stories about witches and ghosts. Many believe that the mountain is made out of crystals, which is responsible for the laidback nature of the city.

Dwellers of the Mother City have even gone so far as to say that the mountain is a noble place. And that God’s angles inhabit it from time to time, making it a place of tranquility. Whether you choose to believe in the dramatic giant or the devil-filled myths — the mountain remains an epic nature feat. You should definitely include it in your bucket list!

The crossing is a social SUP event from Small Bay