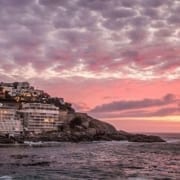 Photo Caption: We love this photo of the burning sky over Cape Town!

Bantry Bay is an affluent suburb of Cape Town which lies on the rocks overlooking the Atlantic Ocean. It lies on the slopes of Lion’s Head, between Sea Point and Camp Bay.  The secluded location makes Bantry Bay the most wind-free area in Cape Town. Its original name was Botany Bay, after a botanical garden planted for the cultivation of medicinal herbs. But the name changed during World War I.

The suburb is just a few minutes away from the renowned Camps Bay, Clifton Beaches, and Hout Bay. Bantry Bay also has its very own beach, the Saunders Beach, which offers breathtaking views of the Atlantic Seaboard. The beach has a tidal pool where visitors can enjoy safe swimming. It also has shower and ablution facilities.  Saunders Beach is an ideal location for an afternoon picnic at Bantry Bay.

What makes Bantry Bay worth the visit, is the fact that it is far enough away from the hustle and bustle of the city and yet at the same time within easy reach of the city’s attractions. It is just five minutes away from the city bowl, V&A Waterfront, and Table Mountain. It is also considered a haven for tourists and traveling business people alike as it offers a wide array of accommodations — from hotels, to bed and breakfasts, to guesthouses and contemporary apartments.

The suburb’s magnificent views of the Atlantic Seaboard, its home-away-from-home kind of accommodations, the variety of attractions nearby and its close proximity to the city make Bantry Bay an ideal base for exploring Cape Town.

Extended! We have some great news. Many of our lo

Flowers and a gorgeous view on a beautiful summer

Top 10 Campsites in and Around Cape Town
Scroll to top